The gents urinals are fitted with Zerodor™, the waterless urinals a Delhi IIT patented product that is free of any consumables and low in maintenance. Conventional water flush urinals use approximately 2-4 liters of water for flushing. The intelligently designed mechanism of Zerodor only allows the liquids (Urine) to pass into the drain pipe and blocks the odor causing gases (coming from the drain pipe) to enter the restroom. This helps in saving a huge volume of fresh water which normally gets wasted in flushing the urine and controlling the odor. Urine mixing with water generates ammonia resulting in bad odor and avoidance of water use limits odor as well. Water is used only during cleaning and this water dilutes the urine if any left in the drain pipes reducing the ammonia formation in the drain pipes.

Depending on the occupancy level of that particular floor, the building automation system is configured to automatically operate an actuator that flushes the urinals automatically – a few times a day – reducing the need for frequent manual cleaning.

Waterless urinals can save about 1,50,000 liters of fresh water per urinal pan per annum. In addition to this it also saves a lot of infrastructure cost like pumping of water, maintenance of plumbing accessories for flush / auto flush devices and sewer maintenance cost due to reduced load on sewer.

The toilet flushing is with 100% recycled water. There is also a signage that says it is a “Paper towels free facility” displaying what it costs the environment to make paper towels and the decomposing of the paper towels produce methane gas that is a leading cause for global warming.

The need for water savings is also depicted to create awareness for occupants to reduce water usage across the building.

All lighting inside the toilets are operated both LUX level & Occupancy detection based. All taps are fitted with aerators for reduced flow and sensors to minimize wastage. The facility also uses green cleaning agents for toilet housekeeping.

Even the exhaust fans in the toilet are operated automatically based on occupancy levels trying to save as much as energy as possible. The cooled return-air from the work space is pumped into the toilets to keep the toilets cool as well. 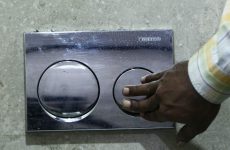 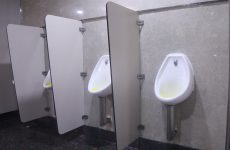 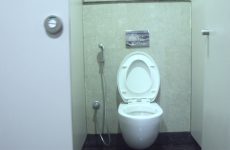 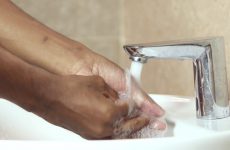 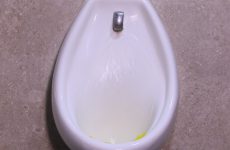