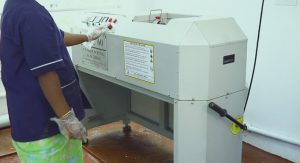 Being a software company, SIERRA is a paper-less office and produces very less paper waste. The green toilets avoid usage of paper towels. The facility has a less-plastics-use policy and the plastic waste generated is limited to packing materials received at the facility.

The Organic Waste generated from the kitchen, dining and the garden are processed adding an organic mixture called Bioculum along with some saw dust which acts as an absorbent using a machine called Organic Waste Converter that uses very less power to process the waste. The output of this is stored in a curing system which maintains the moisture levels of the converted waste and turns it into highly nutrient organic manure in about 10 days’ time. Bioculum is a mixture of microorganism cultures that accelerate the aerobic composting of bio degradable organic waste. It also treats the waste and makes it free from pathogens, foul smells and weed seeds. This manure is used for the garden and balance is distributed freely to the building occupants and to the neighbourhood.

The paper, plastic and e-waste are 100% sent for recycling to outside agencies.